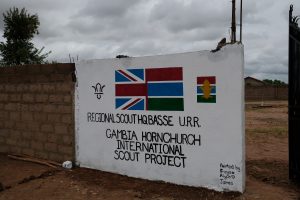 Smashing our original estimate today was a fun, active day which kept us on our toes and we also managed to get the community involved!

From an explorer’s perspective, we turned up at Upminster Junior at 8:30 in the morning, albeit in a bit of a tired stupor. The next half an hour was a frantic and gruelling set up. This strenuous job of shuffling benches and marquees back and cross between St Lawrence and the school however, proved to be our first exposure to the community. With frantic looks and gormless gazes from passers-by and from people’s windscreens, I like to think even we were grabbing the community’s attention.

9 o’clock came and past and it was show time.  Over the next few hours we all busied ourselves with the tasks ahead.  Everyone scaled the climbing wall multiple times, although some more than others, but not before we had each adorned our own personal GHISP tops ‘n’ hoodies. Although to a degree this did make us look like a flash mob, it was useful to help differentiate us working as a group and simply a random climbing wall activity in the middle of Upminster.

By half one we were halfway to our target and already knackered. A stream of different cubs, scouts and beavers had come along to tackle the wall and while they all did a grand job, putting us to shame in some cases; they kept us on toes in regards to reaching our goals. This pressure was in some parts alleviated due to Melissa and Sarah’s motivating calls of ‘pretend you’re a spider’ and ‘pretend you’re being chased by a bear’

It wasn’t only members of the scouting association that came along and had a go; we had several trendy parents take part along with their children and at one point even the police. Each and every one of the local community support officers had a go and even bought a donut afterwards…

Talking about donuts, oh “donut” get me started… The donuts were an interesting vector and we did sell a bunch to children and parents alike, although we did end up resorting to some more interesting methods for sales. Including and not limited to, persuading drivers at the traffic lights into purchasing a philanthropic snack.

All in all it was a fantastic day. It was one of our most successful fundraisers and a fun, active day for not only us but you guys, the community, as well.

A massive thank you to all the benevolent sponsors, the numerous brave climbers, the dedicated pair managing the wall and the hungry donut consumers.  However, last but not least, a massive thank you, to you. Thanks for turning up, thanks for spreading the word, thanks for passing by and also checking out our website later on. Thanks for being involved, thanks for helping us to help the people in Gambia, to do something really cool.